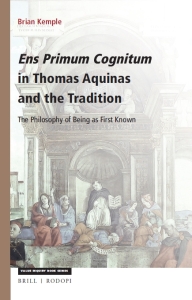 Below are the first five or so pages of my recently published dissertation, Ens Primum Cognitum in Thomas Aquinas and the Tradition (Brill: Boston, 2017).  This passage explains, in brief, what the book is about and why I wrote it.  I hope it does not sound too presumptuous to say that my intent, and my interpretation of Thomas Aquinas, marks a shift in Thomistic philosophy–a shift away from metaphysical realism and towards a semiotic worldview.

Regardless, I welcome any questions and all criticism.

Escaping the Framework of Modernity

Illud quod primo cadit in apprehensione, est ens, cuius intellectus includitur in omnibus quaecumque quis apprehendit – that which first falls into the apprehension is being, which is included by the intellect in all else that it apprehends.[1]  What does it mean to apprehend—and what is this being which is apprehended first?

Étienne Gilson writes in his first missive against critical and idealist philosophies, Methodical Realism, that the “epistemological” problem raised by the central question of modern philosophy, how it is that we know things outside the mind, “is posed in terms which, of necessity, imply idealism itself as a solution.”[2]  Consequently, Gilson asserts that any attempt to produce a realist philosophy which includes a critical turn is inevitably condemned to the inescapable prison of idealism.  Instead, he turns his focus to the primacy of the “real”—that is, extramental being, the substances which exist independently of human consciousness.  Whereas some Thomists have attempted to found their theories of knowledge on a Kantian-influenced critique of knowledge and thereby de facto reduced the primum cognitum to an a priori and innately possessed concept, Gilson and others may have, on the other hand, been too quick to interpret the “being” of St. Thomas’ claim, that being is the first apprehended, to include nothing other than what is often called ens reale, being as it exists independently of any human understanding.

The Thomistic realism of the 20th century which developed largely on the basis of Gilson’s thought, while successful in overcoming modern philosophy and its problematic way of ideas, nevertheless flirts continually with the same error against which Gilson warned the Louvain school of transcendental Thomism:[3] although they did not fall into the trap that one must establish how it is that we know before it can be shown that one knows things outside the mind, Gilson and his followers do seem to accept from modern philosophy an opposition of the objects of cognition, i.e., as either within the mind or outside of it, which implies as the sole solution to the problem of knowledge that the proper objects of knowledge are only those things that have their whole mode of being entirely independent of human cognition.[4]  While this approach succeeds in escaping the epistemological quagmire which follows upon taking knowledge of the extramental world as problematic, it does not fully explore the nuances of Thomas’ own teachings on human knowledge.  In other words, accepting that all objects of thought are either ens reale, as something existing outside the mind, or ens rationis, as something existing only in the mind, such that the two kinds of objects are mutually exclusive of one another,[5] and interpreting St. Thomas through this exhaustive and exclusive division of objects, does not fully accord with the teaching of the Common Doctor.  This opposition of ens reale and ens rationis, where the former deals with the reality of things themselves and the latter with those things which exist only within the psychological subjectivity of the individual mind, oversimplifies the nature of res and the “real” as well as the manner in which the cognitive faculties of the human being interact with the world, both according to the teaching of St. Thomas and in truth.  Indeed, the term ens reale never appears once in the oeuvre of St. Thomas Aquinas; while this does not mean that there is not some truth to the idea connoted by the term, the stark division of modern philosophy between the mental and the extramental as objects of cognition is not to be found in Thomas.[6]

This approach to the objects of cognition, although it does result in a philosophical approach that avoids the ultimately solipsistic disaster of modern philosophy, nevertheless lends itself to reliance upon an oversimplified and at times insufficiently explained notion of abstraction, and, moreover, results in a conceptual framework inadequately equipped to deal with the emerging importance of relation as a mode of reality equiprimordial with substance.[7]  This equiprimordiality should not be misunderstood to signify that relation exists in a way independent of substances, but rather that the mode of existence of all substances other than God—and even in a certain sense within God, in the three Persons of the Divine Trinity—includes relation in its very nature.

If an interpreter of St. Thomas understands the ens which Thomas calls the primum cognitum to be only that which exists independently of cognition, and thus embraces only the subjective constitution of things, then that interpreter will be insufficiently equipped for dealing with the intellectually-discerned reality of many cognitionally-dependent aspects of human life—the beings with which, indeed, humans are preponderantly engaged—such as the various offices required by civil government,[8] the social significance of the civil recognition of the institution of marriage, the full meaning of what it is to be a professor, the purpose of public sporting events or cheering for a particular team, or the importance of fictional media.  None of these things are wholly cognition-dependent, nor do they fall squarely under what John Searle has called “social reality”; but they are what they are neither without some cognitionally-dependent contribution nor some social framework in which they can be developed.

While we cannot thoroughly explore these various cognitionally-dependent aspects of life in this work, we do intend to establish a theory of knowledge, based in an investigation of Thomas’ claim that being is the first which falls into the intellect’s apprehension, which provides the groundwork for understanding social and otherwise cognitionally-dependent aspects of reality (which are entia rationis) in a manner coherent with the understanding of beings of nature, things the constitution of which is cognition-independent (entia naturae, the term Thomas most frequently uses in opposition to ens rationis).

(Available at Amazon and from Brill)

[4] Cf. Gilson 1939: Réalisme thomiste, 205: “Here we discover the true realist meaning of the formula: ens est quod primum cadit in intellectu.  With its first truth the intellect apprehends what is most profound in its object: the actus essendi.”  Note that an actus essendi is properly said only of that which has being in the substantial order. Cf. 1935: Le réalisme méthodique, 86-92, wherein my point is not explicitly stated, but is heavily implied by the distinctions which Gilson draws between realist and idealist epistemologies.  See also Owens 1992: Cognition: an epistemological inquiry (South Bend, IN: University of Notre Dame Press; Houston, TX: University of St. Thomas Center for Thomistic Studies), 34: “The first problem, then, is to discern what is actually the basic object upon which your cognition directly bears, whether upon externally existing things or upon internally present ideas and sensations.  Upon that foundation the subsequent epistemology will depend.”  Ibid, 153: “The notion of an ‘objective concept’ does not fit very well into an epistemology in which real sensible things are the direct object of our intellection.  Rather, the object of the concept is the thing itself as known in abstraction.  In this way the human nature, the animal nature, and the vegetative nature of a perceived object are represented in separate concepts.  They are represented apart from each other, even though in reality they are never found in separation from the really existent individual.  The existence these objects have in separation from one another is accordingly cognitional existence.  As abstracted they cannot be sensibly perceived or imagined, though they are always known in a sensible image.  The notion of ‘objective existence,’ as contrasted with real existence, would seem wrongly to endow the abstracted nature with a kind of being in between cognitional and real existence.”  Also Klubertanz 1952a: Introduction to the Philosophy of Being (New York: Appleton-Century-Crofts, Inc., 1955), 35-40.  The common problem indicated by these texts is not that they engage the problem of modern epistemology in the framework of its own terms, but in rejecting the notion that ideas are the direct objects of our acts of understanding, there is an overreaction and overemphasis on the priority of the “real” as the object of intellectual activity.  The consequence of this is that entia rationis are left without a sufficient account, not only in how they come to be known, but also in terms of how they are incorporated into many of the discursively formed concepts of the intellect.

[5] See, for instance, the treatment in Joseph Owens’ 1963: An Elementary Christian Metaphysics (Milwaukee, WI: Bruce Publishing Co.); references are to the University of St. Thomas Center for Thomistic Studies edition reprinted in 1985 (South Bend, IN: University of Notre Dame Press), 38-39, or, in the same work, in terms of first and second intention at 240: “The first intention bears directly upon the thing as it is in real being or in the imagination.  The second intention bears only upon the thing as it is in intentional being in the intellect.”

[7] Cf. Joseph Ratzinger 1970: Introduction to Christianity (New York: Herder and Herder), 132: “the undivided sway of thinking in terms of substance is ended; relation is discovered as an equally valid primordial mode of reality.”  Thomas Langan 1996: Being and Truth (Columbia, MO: University of Missouri Press), 39: “relation is emerging as central.  This is inevitable, given the finite mind that does not—as the divine Mind does—generate its own Word from itself but must find the stuff of its word given in a transcending reality.  But it is not just our knowledge that is relational.  The things themselves (including, of course, our own bodies) because they, too, are finite, and hence do not provide their own conditions, are caught up in webs of causality and other real relations, the basis of further networks of implication between abstract concepts.  Only because real relations between things are visible to us and recognizable as such do we have a base for discovering the distinction between such real relations and those constructed imaginatively by the mind.” The importance of relation is the central thesis to Adrian Pabst 2012: Metaphysics: The Creation of Hierarchy (Grand Rapids, Michigan: Wm. B. Eerdmans Publishing Co.).  Cf. c.5 below for my own discussion of relation, including many other relevant citations.

[8] For instance, when we say that a human being is a “judge”, as the magistrate in a court of law, what does this mean?  Clearly, the judge is supposed to be proximately capable of rendering good judgment concerning the application of the law, and the accomplishment of this is the end towards which he is ordered qua judge.  However, to be a judge, as an official either elected or appointed, is not just to be one who judges well, but one who is recognized as having the authority to pronounce judgments by the government and always to some extent by the general populace of the governed.  In other words, the “judgeness” of the judge, as an office, although based in some way upon it, is not to be found in the subjective constitution or activity of the judge himself, but rather in the objective constitution given him through the way in which he is considered by others.  Cf. 1.3.1.2.2.